We have seen video bombing, photo bombing, now check this news “bombing” or even news “crashing” strategy called News Jacking, which is simply the art and science of reaching people by creating content that injects your own ideas into a breaking news story states David Meerman Scott.

So what happens and how can you news jack? When news breaks, it typically breaks in a bell shape curve. It grows quickly in excitement and then it peaks either in a couple of hours or days depending on the nature of the story before it becomes old news. Your job if you are going to news jack is to inject your story/brand as it is breaking, as it is rising. Your information has to be out exactly when people are talking about the breaking news story to be associated with it. 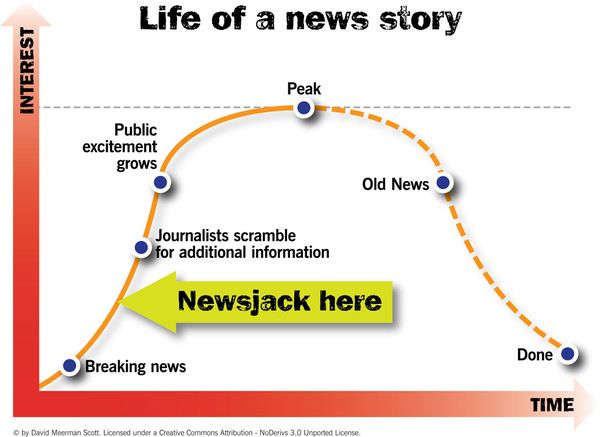 Oreo is a famous example as seen in the 2013 Super bowl when – they tweeted “Power Out, No Problem, you can still dunk in the dark.” This then recieved tons and tons of media attention therefore free coverage during a period when advertising costs millions. In the 2014 Super bowl, what did they do? Well this time, they simply tweeted “Hey guys…enjoy the games tonight. We’re going dark. #OreoOut” saving themselves a whopping USD 4 million per minute for advertising at the Super bowl.

A few days ago, it was Nissan the car brand who were clever to take a rumour seriously enough enabling them to be on top of this news item when it was confirmed.

It was about as real-time as marketing gets. A mere seven minutes after the royal family’s announcement on Monday 8th September that the Duke and Duchess of Cambridge were expecting again, that Nissan U.K. posted the tweet below. 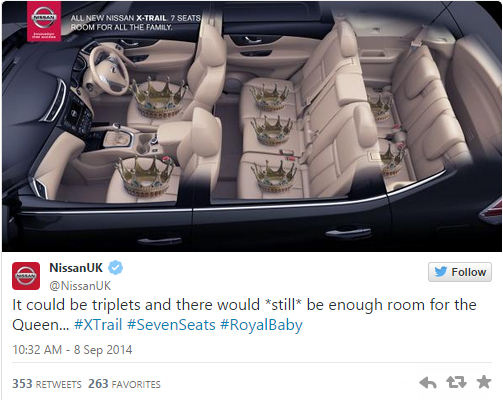 But it wasn’t a matter of lightning-fast creative. It was all planned…”We spotted the trend for Royal Baby when the last rumours started mid-July and created a piece ready to go at that time,” said David Parkinson, head of social and digital engagement for Nissan in Europe. “As it happened, the rumour was never confirmed, so we kept the piece in our back pocket. It was with our media agency, [Manning Gottlieb] OMD, ready to go as soon as it was [confirmed].“

Parkinson adds: “When the rumour was confirmed yesterday we already had everything in place with our agencies and were able to push the creative out very fast.“

The pregnancy rumours earlier this summer were spotted by Nissan and DigitasLBi France’s BrandLive initiative, which is basically a control center that scans news and trends for ideas the brand might tie into.

The system seems to be working, as Nissan was first out of the gate on the pregnancy news. “As with all things that look easy, there was in fact a lot of hard work behind the scenes,” said Parkinson. “We are very proud of the success we have had with this piece, and of course wish the Duchess a speedy recovery from her current sickness.“

News Jacking is a lot more than the stories you can anticipate, it is also very interesting when you are able to news jack an item you did not know was coming. How to do it? Follow the news in real time – ie Google news, international news, local news stories, industry stories etc to see what is going on, to get the scoop about what is potentially going to happen. Caution: you need to be careful, news jacking a negative news story can backfire, example – AT&T suffering a backlash during a 9/11 remembrance.